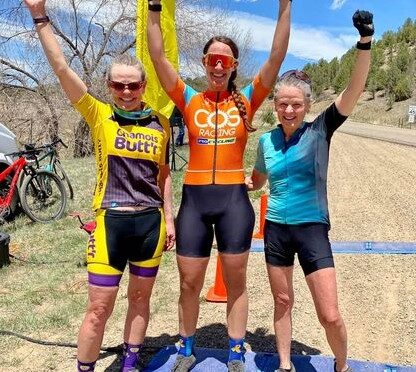 08 May 2021.  TRINIDAD, CO – Johanna Neuber and Vladislav Dragomirov won the women and men’s categories at today’s Pony Xpress 85 (PX85) gravel race in Trinidad, CO. Pony Xpress is part of the Colorado Gravel Grinder Championships.  This year’s event featured over 230 riders competing on 85K and 160K courses through the Sangre de Christo Mountains with epic altitude gains of 3,500ft and 8,400ft.

There was an impressive sea of blue-and-orange jerseys at the start, standing out boldly in a field of approximately 110 gravel riders for the 85K race.

Other notable mentions included Andrew McAdoo, who completed the 160K route plus some bonus miles, and Benton Beltramo, Derek Bondy, and Aaron Sudduth, who each took 4th place in Men’s 20-29, 30-39, and 40-49, respectively.

Finally, for a few others teammates, this was their first race of the year. This includes Benton Beltramo, Chris Ferguson, David McDaniel, Curtis Potter, and others.

Thanks also to our sponsors and Mr. Phil Schweizer of Koobi Saddles for hosting the race.

KIOWA, CO — It was a great day of racing for COS Racing at the Encierro Velo 100K Gravel Race, particularly in the Masters’ field. Six COS Racing riders took to the start today on a grueling 60-mile course that featured several long climbs and dozens of shorter ones. The top COS Racing performance came from Vladislav Dragomirov – who finished just off the podium in 4th place overall and 1st in the Men’s 30-39 category. Several of our Master’s racers also took podium positions. J Erik Hartel came in 14th overall and third in Masters Men (MM) 50+ while Mike West, Kevin Healy, and Michael Jones took first, second, and fifth in MM 60+.

As one might have predicted, this field was disproportionately stacked with professional gravel and road racers from throughout the region – most notably, team-friend Jonathan Cavner (Rodeo Labs) and former team member and neo-pro Henry York (Rio Grande) – all eager to race hard after a long COVID-enforced racing drought. At mile 5, on a section of road that featured strong crosswinds, Rodeo Labs launched a strong attack that shattered the field. Only Dragomirov was able to match the intensity – for a while, at least. Not atypical of gravel racing, the rest of the COS Racing contingent was left to race solo or in small groups soldiering through deep sand and over washboard conditions. Dragomirov described his race experience as a 54-mile individual time trial after losing contact with the lead trio. Most of our other riders shared his experience.

The race concluded with a Paris-Roubaix-style lap of the interior of the rodeo arena – a grueling slog through soft sand that had many riders dismounting to run their bikes across the line. The race was ultimately won by Nick Gould (Rodeo Labs).

This race was the first cycling event in the region since the lifting of some COVID-19 restrictions. Race organizer Phil Schweizer maintained solid control over the environment, enforced standards of social distancing and face-coverings in the start and finish areas, and had ample quantities of hand-sanitizer and other supplies on hand. Gravel racing is uniquely well-suited to social distancing since fields tend to splinter into small socially-distanced groups and individuals rather quickly. In this race, Rodeo Labs’ early attack set the conditions for a very dispersed race.

On 7-9 December, COS Racing will field four teams to ride stationary trainers to benefit Kids on Bikes 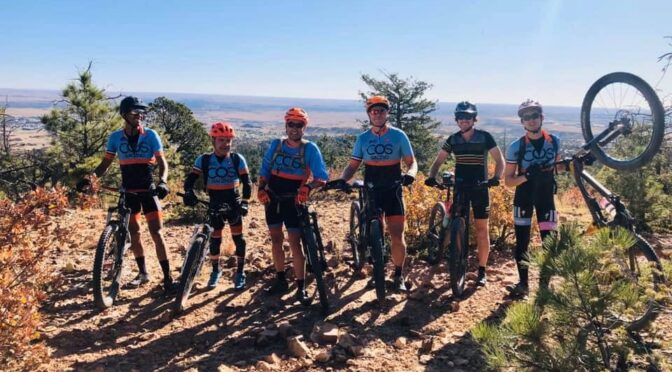 A Celebration of Life Happy Hour will be held in teammate Ryan Knoche’s honor on his birthday, December 4, 2019 from 4-7:00pm at Trails End Taproom, 3103 West Colorado Avenue, Colorado Springs, Colorado 80904. 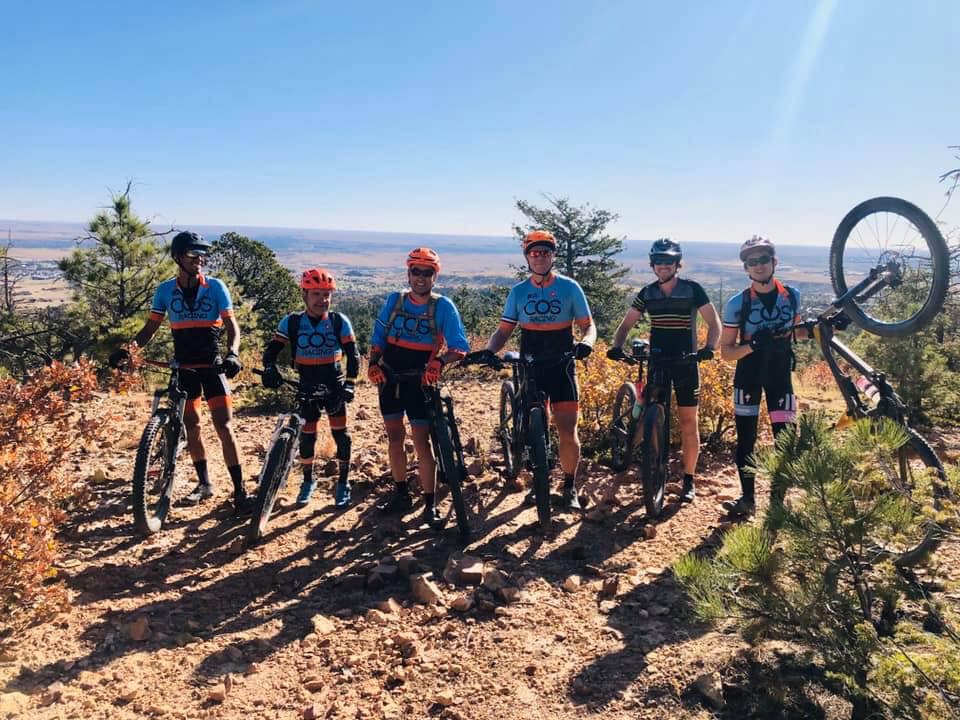 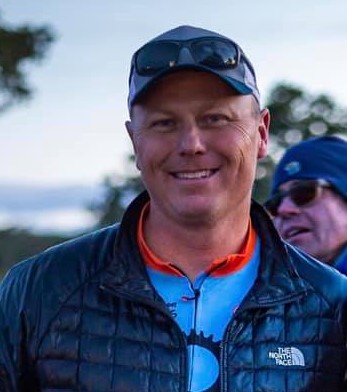 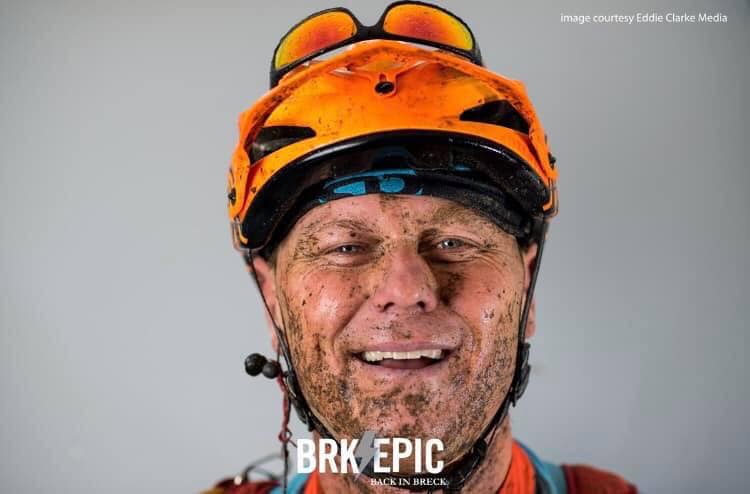 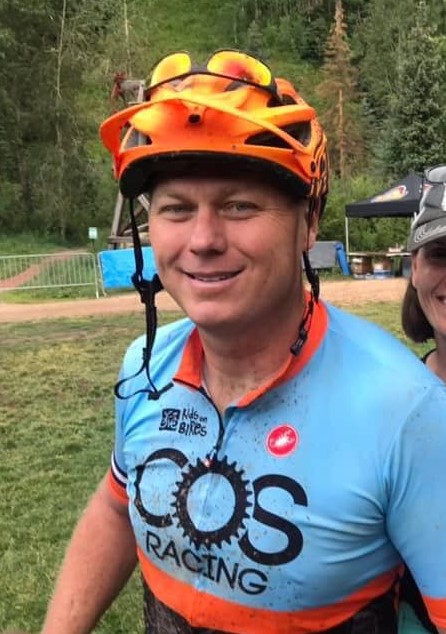 Ryan’s full obituary can be read at the Colorado Springs Gazette website: LINK

This will be an informational meeting for prospective riders and returning members, as well as an opportunity to meet team members and learn about programs being offered to support racers and bike racing in our region. COS Racing has spots available for interested male and female riders on its Road, Mountain Bike, Gravel, Cyclocross, and Track squads.

COS Racing is Colorado Springs’ largest racing team with more than 80 members. COS Racing racers had more than 125 top-3 podium-finishes this year in national, regional, and local races. 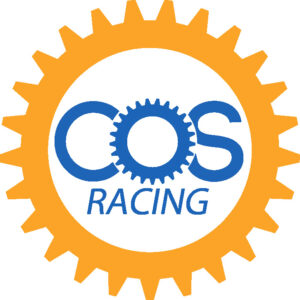